skip to main | skip to sidebar

The Miracle of John Leary 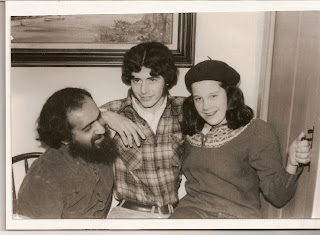 My cousins were visiting yesterday and asked me about this picture that my father had in his living room. They were walking out the door. It was hard to race through such a life changing story. I tried. Usually when I tell this story I start off with, "We will have to go all the way back to the Civil War" I have no idea why I say that , maybe because it is so involved and enormous.

When my sister Jo was in college she was active in the peace movement. She became great friends with this fellow named John Leary, who is in the middle here. The other guy is my fabulous brother-in-law Ravi, Jo's husband and I am wearing that stupid beret. I think I was thirteen.

So many, hundreds and hundreds, of people came to his wake. Two in particular stood out. One was this truck driver that had met John once, two years prior, John had been hitchhiking. This guy had only spent one hour with him. He had read his obituary in the Boston Globe and had driven over an hour to pay his respects. The other was this Catholic nun who said, "When I looked into John's eyes I could see all the way to Heaven"

I was such a teenager at the time and his death hit me hard. I knew exactly what that nun was saying. He had endless blue pools. Endless. I remember trying not to look at his eyes all the time, because if I did look at them, I would stare. They were that intense and beautiful. We used to play jacks. He was so patient with me. How I loved him.

This is just part of my story.

When I was 25 years old I moved to Honolulu with no plan at all (and my father said "a vague purse"). I was staying with some friends, purse getting more and more vague. I decided that I should get a nanny job. I was certainly qualified. I had been a nanny for years in Georgia.

I looked in the newspaper. There were 12 ads. I picked the second to last one because it had the same first 3 numbers as the folks I was staying with. I figured it would be close by. I called the number. The mother and I laughed at the fact that we were both Irish Catholics from New England. Hardy har har. We exchanged names and made a plan to meet the next day. When I arrived at the house I saw that this Irish woman was holding a very Chinese looking baby. I said something offhand like, "Wow, he's gorgeous, my sister is married to an Indian. Her kids are stunning too."

I will never forget her reaction for as long as I live. Her eyes welled up with tears, her four month old slipped a little on her hip. She said, "Is your sister Jo McGowan?" I said, "Yeah, have you read her?" She said, "Well yes, but your sister was my brother's best friend. He died when he was 24" I made the connection at once. I cried too. I said, "You are John Leary's sister? He used to babysit me!" Of course the job was mine and I lived with the lovely Leary/Liu family for 2 and half years!

Rosemary told me that she had been lying in bed the night before praying to John. She said that she told him, "OK John, you have left me down here, and now I have 4 kids. What am I going to do for childcare?" I was so pleased to be an answer to a prayer.Yes.

I often reminded them of that if we disagreed about anything. Anything at all. It became my go-to line. Ahem, I believe I am the answer to the prayer. I believe it was you who placed that prayer and I don't want to eat at Compadres tonight, I'd rather go to Mekong. It never worked, but I never quit working it every chance I got.

I had such a good time in that house. We had so much fun. My little Emily, who had just turned two when I moved in, is now a Sophomore at Northeastern in Boston and she babysits for us!
Posted by Lucy Cuseo at 2:25 PM

This story never ceases to amaze. Lucy, send it somewhere. It should be published at least once a year!

Send it to Ira Glass. Seriously, you should be on that show.

Lucy, a friend from Haley House send the link to your blog to me. It's beautiful. I knew John. I lived at Haley House from 1977-80, prior to when John lived there and my wife Noreen is the director of affordable housing for Haley House. One of the buildings she oversees is John Leary House on Mass Av in Boston. John's spirit lives on.

I went to St. Bernard's School with John. He was the brightest kid in my class. A kind person to all. We lost track of each other in high school. When I learned of his death,I was devastated. I'm glad to hear how he went on to help and affect so many people's lives. God bless you John. I hope we reconnect some day on the other side.

Wow, how selfless. I always knew John was special and undoubtedly the smartest kid in class at St. Bernard's. We went from 1st grade all the way to graduation on 1972. Then I lost track of him too. He was a kind soul, he knew he was smart, but, he never acted pretentiously about it. He enjoyed life, but, never indulged in our mischievous actions. And, those eyes, yes, I remember the, well. Who knew that we we amount such gratness and such selflessness? God bless you John Leary, friends forever. I'm sorry I didn't know.

Lucy Cuseo
I am cleaning my oven.